Listen, you should give it to the Chinese: they take what little they might have and make the most of it. A case in point is Elephant Trunk Hill. It really is only a hill which is partly flanked by a passing river, with a whole on the one side … the jury is out (according to me) whether this whole was made by Mother Nature, or members of the Guilin Tourism Board.

The Guilin region get some 10 million tourists each year, of which 8 million is domestic. To have a proper view of the Elephant’s Trunk, you must pay an entrance fee. To ensure no one sneaks a free view of this attraction, there are some very strategic shrubbery planted along the side of the river close to the Hill. OK, so we paid the entrance and went in – after all, this is sold to us as a highlight … whoop deee whoop. A hill with a whole in it.

Really? Is this it??

The Li River is 437km long, but 83km of it flows between Guilin and Yangzhou. A boat cruise takes approximately 4 hours. At the time it was their dry season and at a few spots it felt more like a shallow canal than a river. Compliments to the captain for navigating all the tight corners and turns we had to take along this otherwise extremely scenic cruise.

All the cruise boats are owned by the government and not surprisingly it shows. Each boat has its own kitchen and about two hours into the cruise lunch is served. This was certainly a highlight for the domestic travelers!

Out of our group of 6, I was the only one brave enough to fight my way to the free lunch. This is all I felt comfortable with and could vaguely identify. I think I had a chicken drumstick from the midget gene pool and those white cubes turned out not to be cooked potato. Oh well, the food stayed down and the Lomotil untouched.

According to our guide – a local resident – Guilin is known for the quality of their food. Now he tells me! He shared the following anecdote with us: An alien ship crashed in China. Beijing suggested to research the occupants to learn about their foreign culture and technologies. Shanghai wanted to profit from the aliens by putting them in a circus and charge an entrance fee, whilst the people from Guilin curiously asked whether they should not first establish what they taste like.

Cooking on the go

Yep, we went through that gap 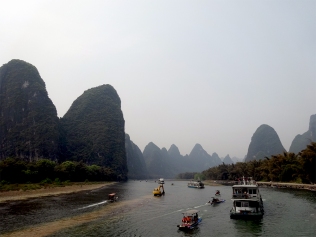 In Yangzhou, we rented bicycles [4.] and went for a casual cycle in the surrounding countryside. If you have not been on a bicycle for a while, then the first 100 meters certainly jogs the memory. Pensionfund and myself are such traveling techno-nerds, but thanks to Fitbit Tracker on our phones, I can report that this “casual” outing turned out to be 15km!

Are we crazy or what?

We went for a cooking class in Yangzhou … the beginning bits felt more like a chopping class.

Chinese food is easy to make and fast, given you have staff on hand for prepping and washing up 😉 We discovered eggplant and it was yummy.