When we visited the capital city of Vietnam in October 2017, we stayed in the Old Quarter. It is near Hoan Kiem Lake and the area is characteristic for its Chinese and French influences (due to historic occupation and rule). The streets used to be roughly laid out by trade, but nowadays it is a cacophonic symphony of scooters (see our take on it here), bicycles, motors and pedestrians, with trading opportunities on the sidewalks and shops. 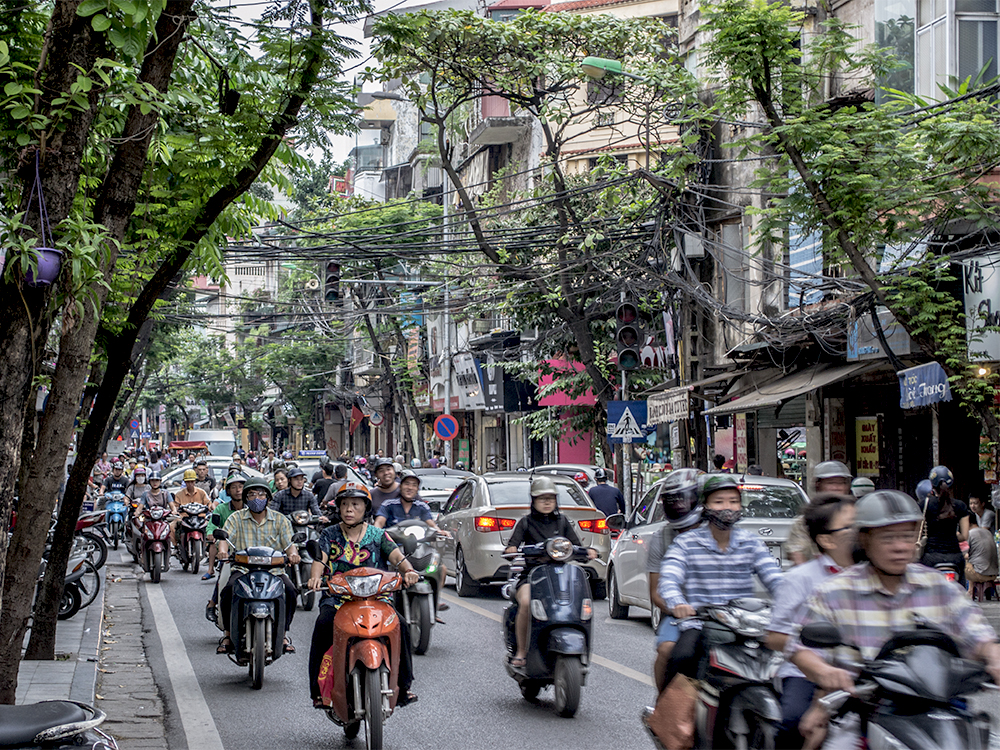 Reunification Day is a national holiday and celebrated annually on 30 April, yet the unification of Vietnam took actually place on 2 July (1976). It is this latter date which also saw the most populous city change names from Saigon to Ho Chi Minh City … named after the revolutionary leader Ho Chi Minh.

We stayed at the La Siesta Trendy Hotel, in a Trendy Deluxe (I swear it is code for ‘super small’) room. Not that it bothered us much. This was our first hotel room for the holiday and as such the excitement of being abroad overrides a lot, like the fact that one constantly bumps into your suitcases. But let’s be fair as well, we are giants compared to the locals. Every time we saw the bellboys, we couldn’t contain a smile for their “resort wear” uniforms – consisting of chino shorts, loose fitting blue shirt and matching sneakers with white socks – as if we are on some exotic island. 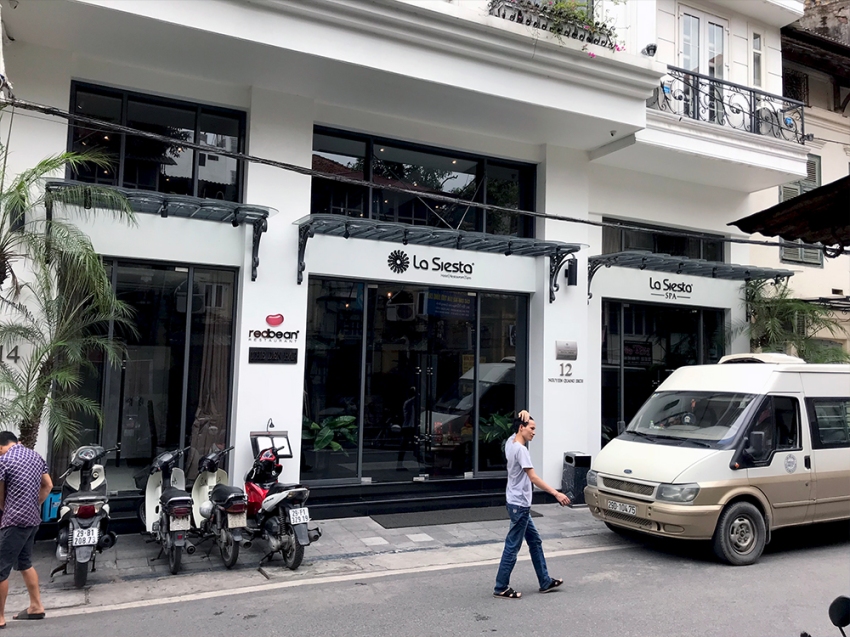 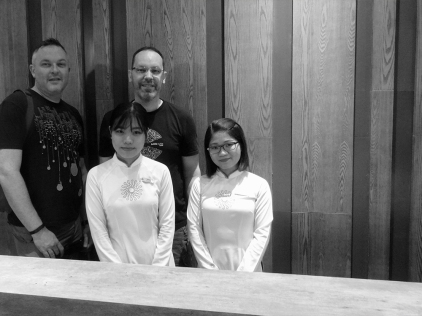 In a land where space comes at a premium, the luxury of driveways and gardens seems reserved for national monuments and public spaces. From the hotel’s front door to the street was exactly the length of a scooter! This also explains the extreme narrow, but tall buildings. Usually some retail occur on street level, with living quarters above – I guess the bigger the family, the higher you need to build?

These peculiarly narrow but tall buildings were not just limited to the city. We saw these in the countryside (en route to Halong Bay) as well. 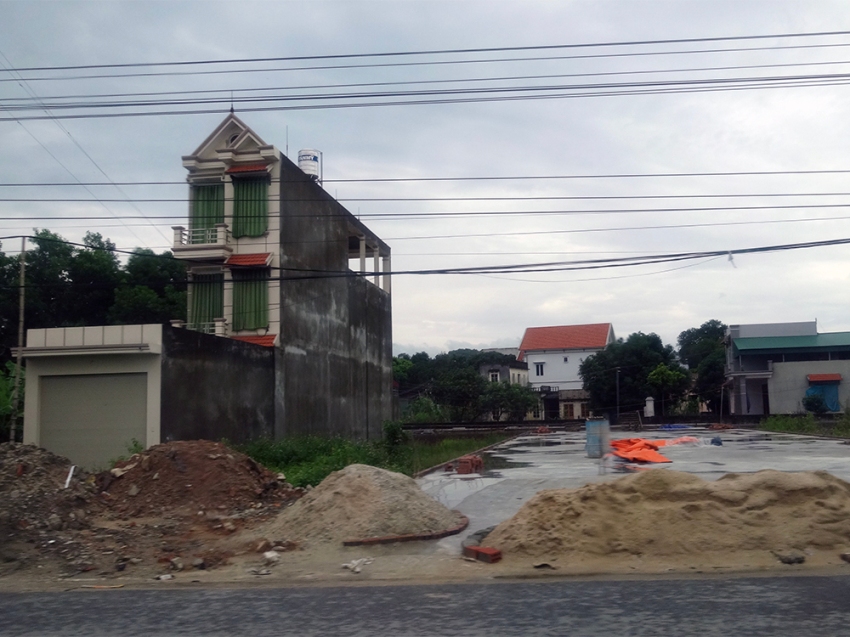 This is the view across our hotel. A seafood shop. No need for a sign really, as the lingering whiff is quite sufficient as to what is on offer. Daily, after their morning deliveries, the family / friends / customers / staff (who knows?) sit outside on the sidewalk to process the stock for the day. 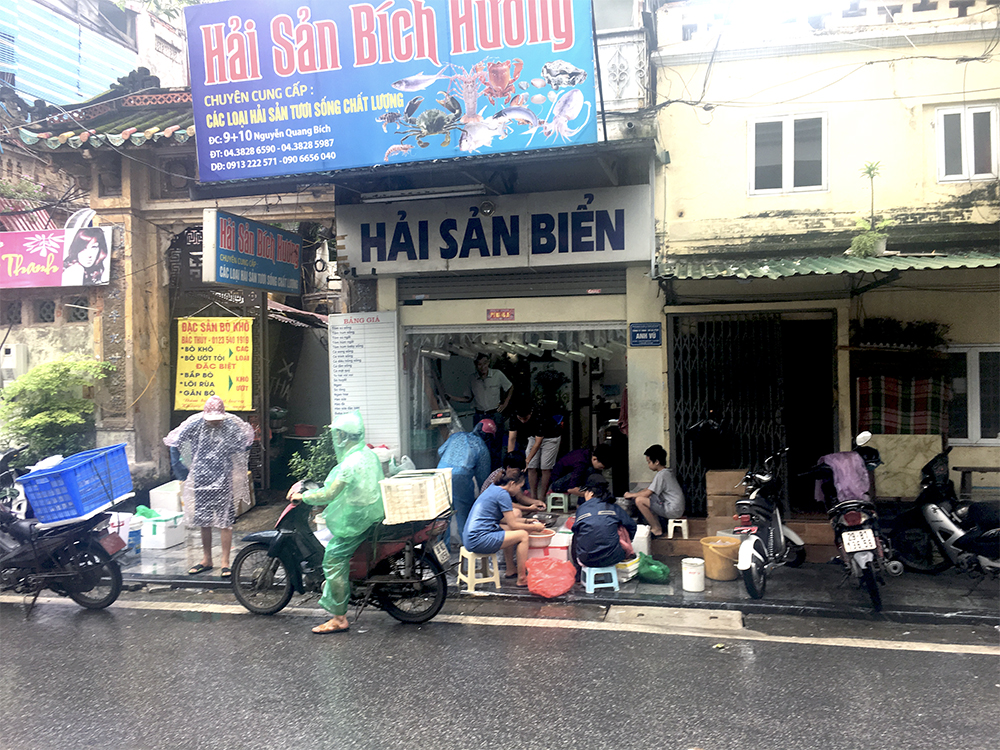 Breakfast is just another name for a meal, right? It remains interesting to see that Asian nations view this literally. Olives and sushi – although I eat both – is a bit advanced so early in the morning. On holiday we tend to be eggs-and-bacon type of guys.

We experience the people of Vietnam to be generally friendly and helpful. Our hotel gave us a map of the surroundings and we decided to take a stroll. As the Old Quarter does not follow a typical horizontal/vertical block layout, we lost our place on the map after a while. As we were trying to find a cross reference of street names (to find our spot on the map again), an elderly lady on a scooter stopped to ask if she can help us. It took her no time to look around and point on the map, as to where we are. This random act of kindness is rather humbling, as I have hardly assisted a lost tourist back home in my life before. As such, I now owe the universe to return the favour.

We used China Odyssey Tours (nowadays called Odynovo) for this holiday. We had such a pleasant experience with them in 2015, that we employed their services again in 2017. However when it comes to Hanoi, I secretly suspect everyone is using the same recipe: we bumped into a couple from our hotel three times on the same day and they used a local one-day-only guide!

Despite Uncle Ho‘s wish to be cremated, his country stuffed his embalmed body in a square concrete building, opposite a typical communist square: unnecessarily vast to let one feel small and insignificant.

LOL. Stupid tourists taking photos of old cars that allegedly once had an important passenger. Why these cars qualify for air conditioning remains a mystery though. 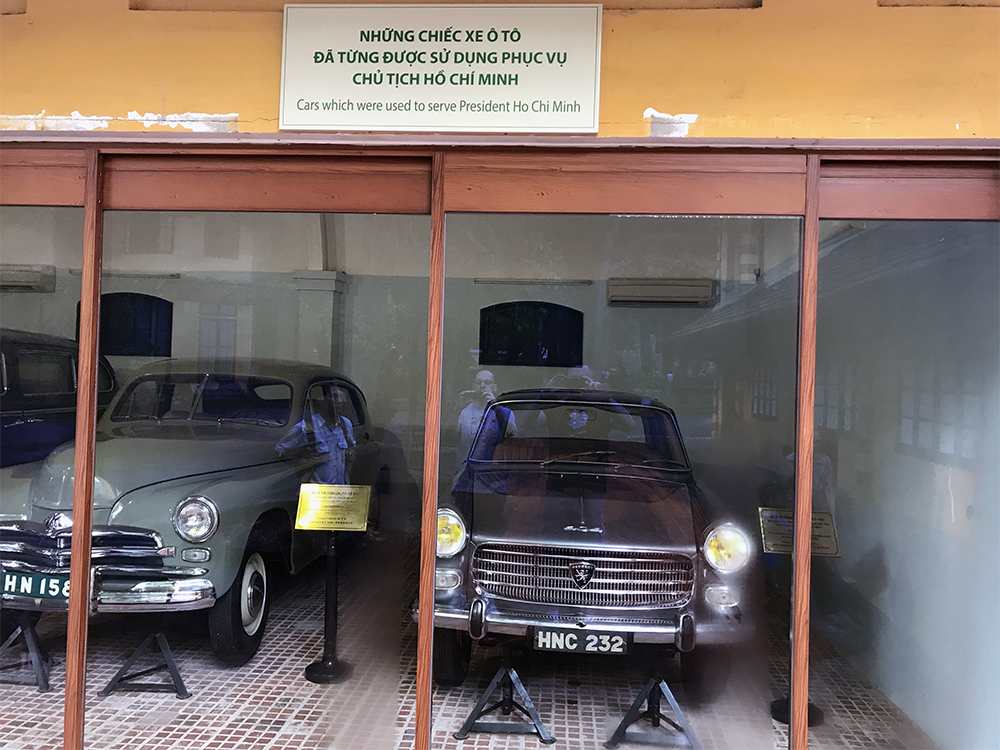 After all things Ho Chi Minh and a short stroll through a tourist trap gauntlet with typical knick-knacks and then behold … the One Pillar Pagoda. No disrespect to Buddhism, as this is actually regarded as one of Vietnam’s most iconic temples, but seriously, fix that wall!

I looked forward to the Museum of Ethnology. It is hot and humid outside. Indoors should be bliss, right? No. It is hot and stuffy inside too. Absolutely no aircon. There are endless posters with words and exhibitions that would have been way more interesting to stand and study and ponder, if the air was welcoming and COOL. What was supposed to be a 90 minute itinerary item, we power walked in 20 minutes. Around the last corner a group of children slowed us down. Turned out their English teacher brings them here to practise casual conversation with tourists. Remember I felt guilty about the random act of kindness on day one, so we stopped and spoke to them for a while. It was mainly a “hello how are you?”, “I am doing fine, how are you?”, followed by giggles type-of-conversation, we ran out of time to talk about the blatant exploitation of cheap labour in the local clothing manufacturing sector or the long term downside of communism and freedom of expression. We had time for a quick group photo though. There is a clown in every group – check out the jester with the red backpack in the front row. 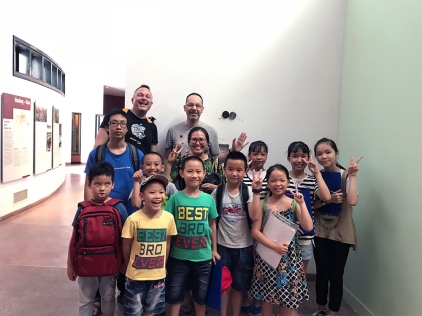 On our travels, we usually seek out something cultural and what makes a nation or culture different from our own. The Water Puppet Show ticked the boxes nicely. It dates back a few centuries to a time when the country was at peace with its neighbours and citizens had time to entertain one another. During the show, puppets seem to float on water and are masterfully manipulated by 10 people hidden behind screens. It is skillfully accompanied by traditional Vietnamese folk music produced on drums, horns, cymbals, wooden bells, bamboo flutes among other, plus vocals. In our show the lead singer looked healthy, but sounded in pain. I suppose it would have helped if we noticed the free pamphlets outside the theater, to explain the various acts to us … but no. We have managed to ignore the guttural agony from stage left as we were trying to figure out how on earth the puppeteers pull off the visuals in front of us. Sadly during our show no photography was allowed, but if you want to get a quick feel for what water puppets are about, click here, or if you are interested to see what is happening backstage, click here. The puppet show is rather popular and the performers barely get a smoke break between shows. This was the crowd greeting us outside the Thang Long Puppet Theatre, eagerly awaiting their turn to aircon.

Pho (pronounced “faaaa”) is traditional Vietnamese street food and looks and smells just plain yummy. The only fat people we saw were tourists, so one can safely assume pho is healthy too. As you might have surmised from the photos, my body is clearly a temple and I might be a fussy eater. LOL. Thing is, the opportunity cost on holiday is so high and the schedule so tight that it is just not worth the risk of an upset stomach, to want to sample all and sundry. Having said that, the wicked lady below had her way with us – still not sure exactly what type of panda, donkey or domestic cat species it was, but it went down very well and stayed down.

Street food is also about socialising and any relative level piece of sidewalk can be turned into a restaurant. (Note the petite chairs!) 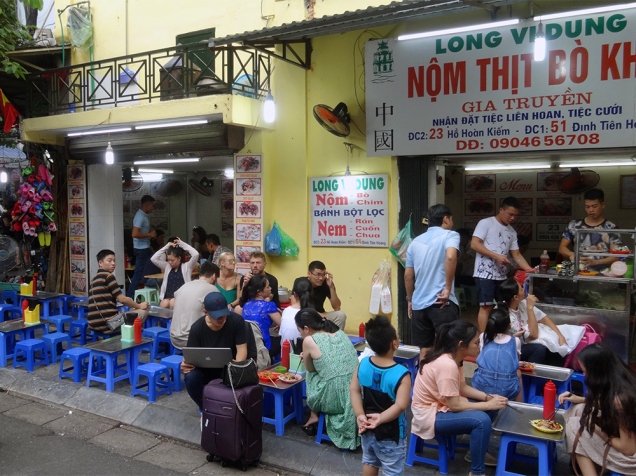 And speaking of sidewalks: come on, admit it, who doesn’t like an al fresco haircut?

I do not really wish to labour this point, but the humidity of Vietnam in October is taxing. Thus between an ice cream or a fan, the latter was more practical and once closed, doubled as an useful “pointing device”. Notice the nerd on holiday with his notebook.

Another great way to experience Hanoi’s Old Quarter and submerge yourself in the sights and sounds, is by means of a bicycle rickshaw. The locals are scrawny and one temporarily feels guilty that they are about to propel your much larger frame around, but then you remember: oh wait, job creation and a promise of a tip at the end of the journey. Right then, back at attempting to capture the moment.

Free range, or a single mother trying to make it in the city?

If you ever find yourself in Hanoi, do not pass on the opportunity to try Egg Coffee. It stems from a time in history when milk was scarce and eggs were used instead. Click here, for a quick hipster recipe, but in essence it is whisked egg yolk with sugar-and-cream, or condensed milk. At less swanky places we noticed that they simply add custard on top of the coffee. Different but tasty!

As Pension Fund is a non-smoker, we usually start the holiday in non-smoking hotel rooms and end with a smoking room. Thus, in Hanoi, I would venture down to street level with coffee, for my morning cough and nicotine fix. One morning there was simply no space in front of our hotel (taken up by scooters!) and I walked across the street to sit behind a tree on a raised cement slab …

As I was minding my own business, from behind that pristine pearl white security gate stormed a sinewy old lady with anger issues, screaming at me “no smoking, no smoking”. Gheez lady, calm your tits. My intention was not to devalue your building any further. It is just a cigarette, not graffiti on your newly painted walls. When last have you stood across the street to take in the beauty of your castle? But I said none of these – at least not out loud. In silence I crossed the street again and smoked another one. Who am I to judge? As you are clearly a proud home owner, may I suggest you perhaps sweep once in a while the sidewalk in front of your luxe villa?

In the mood for an overnight excursion to Ha Long Bay?